The Glenn Miller Orchestra UK was formed in 1988 in conjunction with Glenn Miller Productions of New York. The Glenn Miller Orchestra UK has maintained the exact line-up on stage devised by Glenn, consisting of the leader, five saxophones, four trumpets, four trombones and three rhythm plus a male and female vocalist. The singers perform both individually and as part of The Moonlight Serenaders vocal group. The Uptown Hall Gang - an outstanding Dixieland group drawn from members of the orchestra is also featured...

Check out the Glenn Miller Orchestra 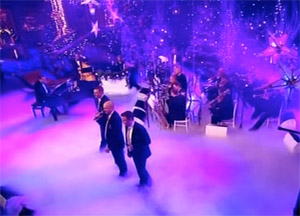 The Paul Moran Big Band consists of the cream of the London session scene.

The band can be seen under Paul's direction on the Paul O'Grady show or can be heard on such albums as the acclaimed Swing album "Passing Strangers" featuring Tony Hadley.