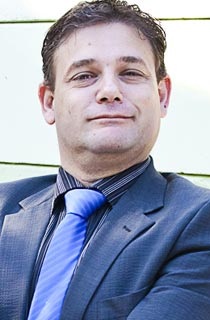 Alan Committie is one of South Africa's leading award-winning comic performers. He is best know for starring and writing his stand up based one-man shows including:

- No Seriously?
- Dick and I
- Fully Committied,
- Titanic on Ice,
- Stressed to Kill
- Happily Ever Laughter

as well as his starring role in the Broadway hit show Defending the Caveman (over 650 performances!).

Committie received a Fleur de Cap Best actor award for Rosencrantz and Guildenstern Are Dead and a Naledi theatre Award for best comic performance for Stressed to Kill. Alan has appeared in numerous stand-up festivals including hosting the Vodacom Funny Festival for the last four years.

He has also directed a number of projects including Offbeat Broadway 4, Cracks and the City and Not the Midnight Mass: 21 year celebration. Alan has appeared in a number of farces for Pieter Toerien including Bedside Manners, Boeing, Boeing! Funny Business and Perfect Wedding!

Alan has written numerous TV shows and served as creator and executive producer of South African Broadcasting Company's hit sitcom Those Who Can't (second season to be broadcast in 2013) and as writer and star of Van der Walt's Fault (cable TV broadcaster Mnet) and Laugh Out Loud (Cable TV broadcaster Mnet). He is about to appear as star and material contributor to a new sitcom on SABC channel 3 called Safe as Hausers.

He is regarded as one of the best comic MC's for corporate functions in and around South Africa and clients include VODACOM, BIDVEST, TOYOTA, AUDI, LIBERTY FINANCIAL INSTITUTION, INVESTEC and others.