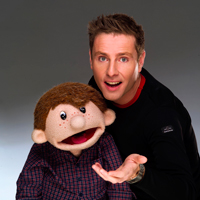 Paul Zerdin is without doubt this country's top ventriloquist.

He began his career as a magician at the age of 15 and, after ruining his GCSE's, decided that the only thing he could do was to go into showbusiness. For the next five years he appeared up and down the country on the club and holiday camp circuit honing his magic while slowly introducing his stand-up comedy and ventriloquism. At the age of 20 he landed his first proper TV job as presenter on GMTV's children's programme 'Rise and Shine'.